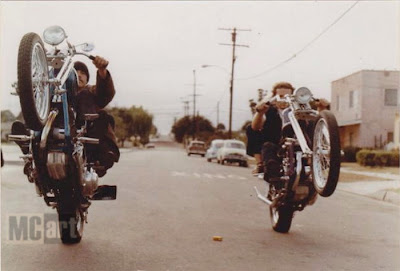 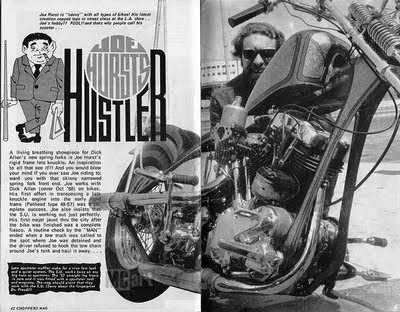 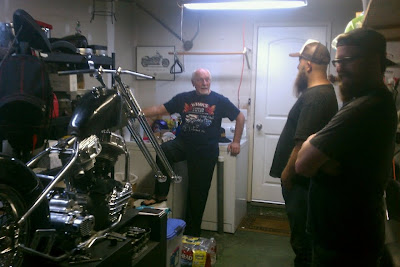 If you've ever heard the name Dick Allen or are familiar with Southern California chopper folklore then you've probably heard of Joe Hurst. Bikes like "White Bear" and the "Hustler" are just a couple of early influential choppers he built in the late 60's/early 70's.

We met Joe at Born Free after he approached Nick (while wearing his bootleg Dick Allen products hat) and said "Dick Allen was my best friend" .

Aww man, busted...this guys so bummed on us right now.

Turns out he's actually pretty stoked on what we're up to and invited us to hang out at his house the other night to check out one of Dick Allens old choppers that he's restoring as a tribute to his long time friend. After awhile we kind of just sat back and listened to some tall tales of chopper glory (you know, the kind of stuff you dream about) for the rest of the night. The last thing Joe said before we left is "you have a Fuddruckers by your house huh? I love that place. Next time I'm gonna come to your house and we can grab a burger!" ....oh yeah, he's totally on the team.

I remember telling Nick on the way home that it will never be as epic as the good ol' days and he snapped back "dude, we're living it right now....do you think those guys thought these would be the stories they'd be telling for the rest of their lives?" He couldn't have been more right. We're having fun, thats all that matters.
Posted by jason webber at 7:13 AM