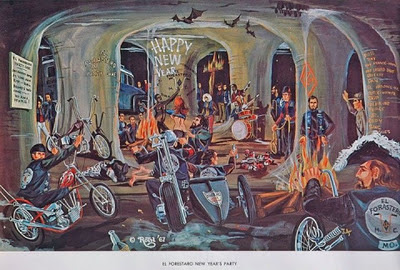 I know for me, this has been an awesome year. I went to some amazing places, met some great people and just plain accomplished stuff I never thought I'd do. Thanks to everbody who checks this blog out and digs what we do, 2011 is gonna be a tough one to beat.

...and happy birthday to my little brother Kevin, hope that yellow fever serves you well tonight.
Posted by jason webber at 9:52 AM 4 comments: 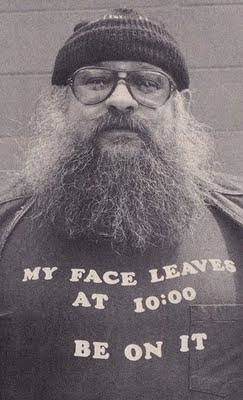 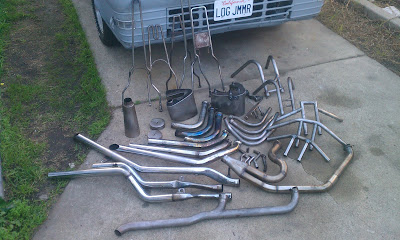 Labels: steppin it up, still fat, we shinin' cuz

Yesterday Michael Schmidt cruised over to and snapped a few photos for Thee Cormans new record. Jason reluctantly volunteered to do his best Randy Smith impersonation. Michael got some really cool shots. The first one is a cute candid one Before take off. In the second Jason looks like a hard ass and the Creature is eating the "V" My stomach hurt from laughing so much! 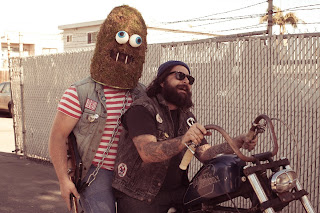 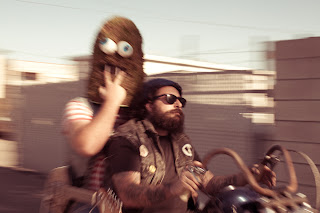 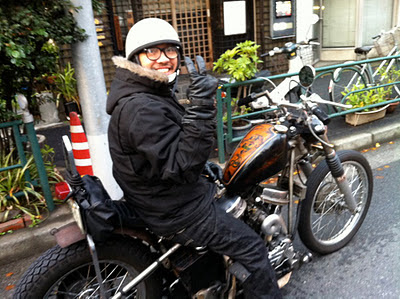 My buddies Mochi and Shin in the far east just started a new blog...get with it. 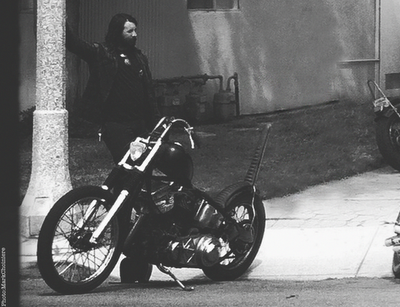 My buddy Mark trying to get my good side...good luck.

been lagging in the garage Felt good to get something done for a change.
Some Z's for Rich in Florida.
Oil tank and happy rabbits for Simon and Eddie's domestic partnership ironhead build.
Thanks guys.
Posted by jason webber at 9:35 AM 1 comment:

Music For A Monday - Bad Brains

How did a band of all black dudes that had strong religious overtones in their lyrics flourish in the predominantly white and secular punk music scene? The best reason I can come up with is that they wrote better music and played that music a lot harder than most of bands at the time. Bad Brains is one of the bands that I would turn up to 11 in my bedroom and jump off my bad and sing along to in the mirror as a teenager. The tunes are so intense but still have such a danceable groove to them. On top of all that they threw in reggae tunes in the middle of all the chaos. I still don't fully comprehend the Bad Brains, but every time I hear them I get fired up and start playing air guitar.


Banned In DC - Check out the fat kid with eh mohawk in this video! He is super into it, rocking his Bad Brains shirt and does a belly flop on some poor kids, Totally reminds me Sloth from Goonies.


Redbone The City - One of my favorite Bad Brains tunes.


At The Movies - I lived in a "punk" house with a bunch of dead beats and we had a 36th generation vhs copy of this whole set. It boggled my mind! It's live footage of the band mixed in with them just cruising around town. Such a killer song that ends with a backflip!!! How can you not be stoked on this!!! 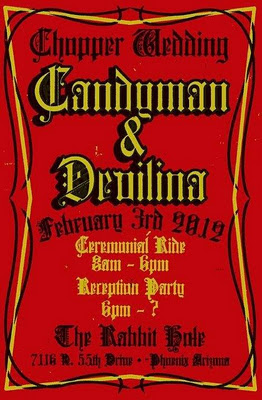 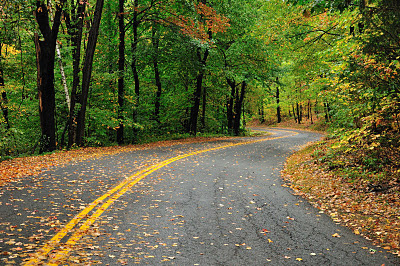 After years of lagging I finally got surgery on my knee. It's only been a day and its probably only going to be a few weeks down but its enough to make me miss putting around on a bike.
Posted by jason webber at 7:05 PM 11 comments:

The dude is bonkers. 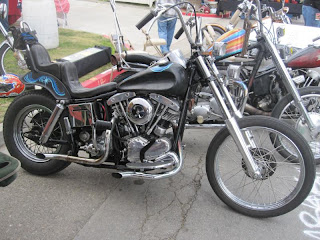 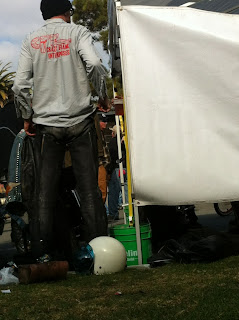 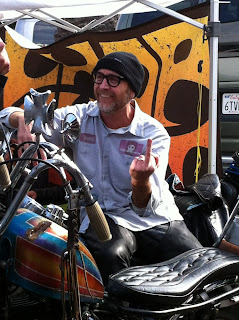 Thanks to Dynamite Joe for sending these pics.
Posted by Nick at 7:54 PM 5 comments: 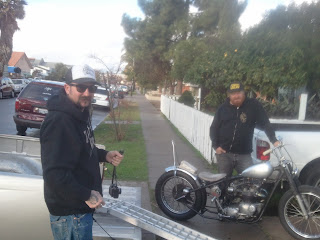 6 Over - Kick Start from Wild Honey Productions on Vimeo.

its funny, this was me yesterday....literally the footage of me trying to kick my bike was from yesterday. You're never cool, at least not when there's an audience.
Posted by jason webber at 3:53 PM No comments: 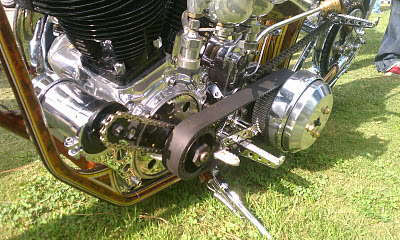 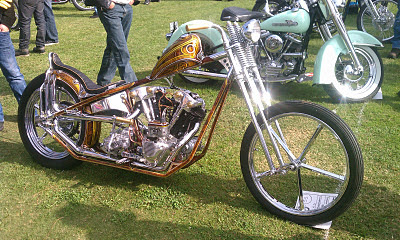 this thing had alot of killer little details. really neat bike for sure. 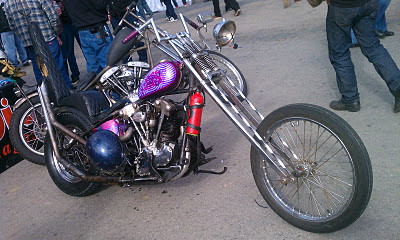 Ryan is an animal. He made the trek down from the mountain for the show. 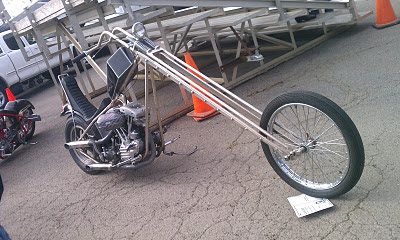 Robert is truly a badass. Dude puts real miles on his bike. I straddled this beast and instantly fell in love, way more comfortable than my couch. 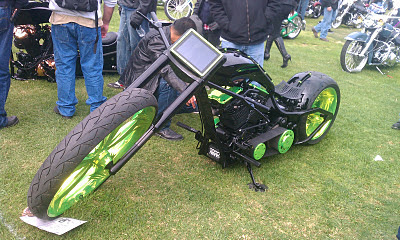 I'm not gonna be the guy that slams this bike because I can appreciate anything handmade but I will say this, it had a 30" wheel and an Ipad for a headlight... 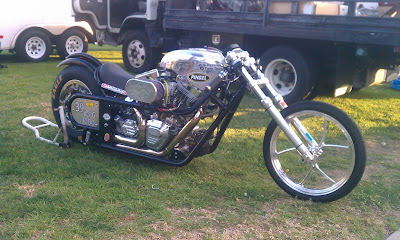 this dragger was wild.


Killer bikes again at David Mann this year, no camera and phone died so I kinda blew it on proper documentation. We rode up the night before and froze our asses off sleeping in the parking lot. Michael Schmidts shovel had a successful maiden voyage. Dave Polgreen knows Dave Chapelle. J is a true gentleman. Turk and Chase braved the cold. Mikey Ratt is the best dude ever, he's on the team. All in all, lots of fun thanks for everyone who stopped by and said hi or just wanted to hang and see some fat dudes brow beat the hell out of each other.
Posted by jason webber at 10:04 PM No comments: 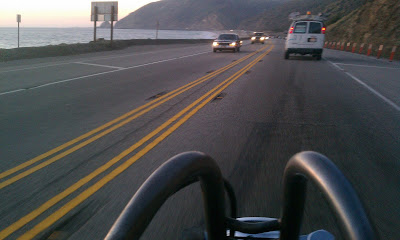 Jammin through Malibu on the way to David Mann.
Posted by jason webber at 6:56 PM 1 comment: 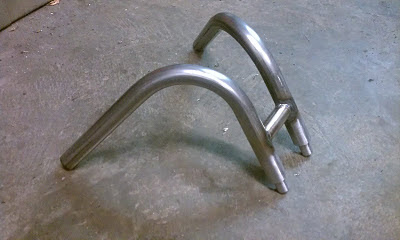 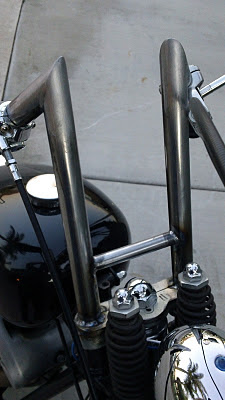 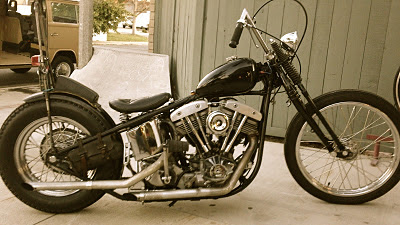 made some bars the other day.
pullbacks for Troys triumph and some tall and steep top clamp Z's for George.
Posted by jason webber at 4:11 PM 2 comments:

Labels: chopper madness, friends, sorry if these have been done before 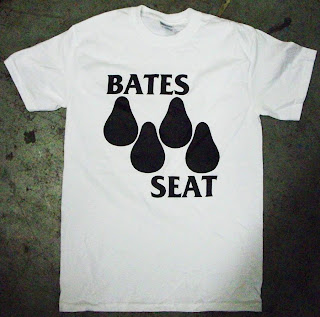 Just in time for XMas! You like choppers, you are a punk rocker, and you have a mediocre sense of humor. Hopefully this will tide you maniacs over while Jason takes 4 more weeks to decide on a sweatshirt design. $20 bucks post paid in the US. In the ATR Store Now
Posted by Nick at 2:06 PM 5 comments: 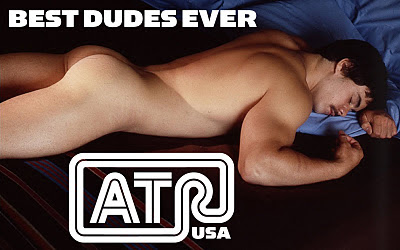 Bouncing around some ideas for new sweatshirts, not 100% on this one yet...
Posted by jason webber at 7:01 AM 4 comments:

Labels: beards, boners, chopper dreams, thanks nick, too much? 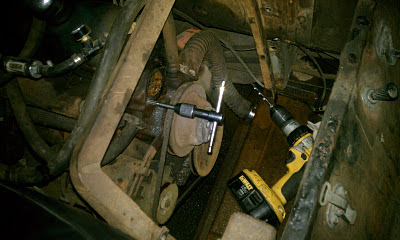 something to look forward to...

I'm 31 but I still get excited over skate videos as if I was 13. Every video that the Girl family has ever put out has been gold, and I'm sure that with Chocolates new blood this video will not let down.
Posted by jason webber at 11:13 PM 8 comments: