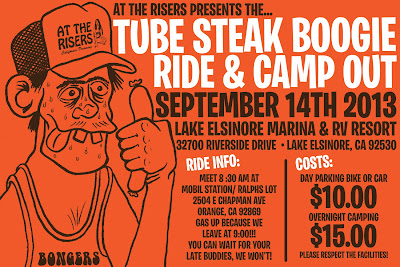 Growing up in Southern California our whole lives, Lake Elsinore has always had a reputation for being a gross, stagnant body of water, in an uncomfortably hot town filled with sketchy folks.  After a handful of trips there we started thinking "what better place to have a little chopper get-together!"  So after minimal planning and preparation we're gonna do it this weekend, Saturday the 14th.  It's not the prettiest place by any means but the dudes who run this area of the lake dig bikes and have been more than cool with sectioning off a little peninsula for us to have all to ourselves to camp right on the water away from the general public.

The idea is to ride out there Saturday morning through Trabuco Canyon and over to Ortega Hwy. where we'll end up at the lake and pretty much spend the day hanging out....not giving away a Knucklehead or trips to Japan, just regular bullshitting, staring at bikes, fishing and splashing around in the warm, swampy water.  Hopefully some of you guys have your 'ol lady bring jetskis or boats so things will get a little buck.  Later on we're gonna be cooking up a few hot dogs so get 'em while they last, maybe project some shitty movies on the side of my trailer? who knows....we don't know what we're doing, this whole thing is kinda being freestyled. We're trying to round up a bunch of coolers and canopies for shade cause it's going to be hot and miserable but if you want to bring your own deal go for it, there will be plenty of space to do it, so bring a tent, thong, a radio or don't...

Just so everybody is clear, the lake charges $10 per vehicle (includes entry for everybody in it or on it)for day use and $5 more if you want to stay the night Saturday (they will be checking to see what pass you have in the evening for campers) so have cash in your pocket as you come up to the gate to make things move smoothly, just remember to tell them that you're there for the ATR deal otherwise you're gonna have to pay $25 to camp. The gate fee gives you access to the lakes showers and marina facilities also they're going to put a few Porta Potties in our area so we don't have to go to the Marina to poop. If you need to buy stuff, the Marina store has snacks and fire wood or you can go down the street to the Grocery store or restaurants if you want to do your own thing. If you want to bring a boat or jetski, the lake charges $25 for use of ramp and permit.

A few of us are meeting up to take the scenic route Saturday morning at the Mobil gas station/Ralphs parking lot (2504 E. Chapman ave. Orange 92869) about 8:30am and leaving at 9am. The ride will be over 60 miles so we'll stop once to top off all the little gas tanks.  Planning on getting to the lake around 10:30ish so if you want to take another route or show up later thats where we'll be.

REMINDER: STRICT SPEED LIMIT OF 5MPH ONCE INSIDE SO DON'T BLOW IT 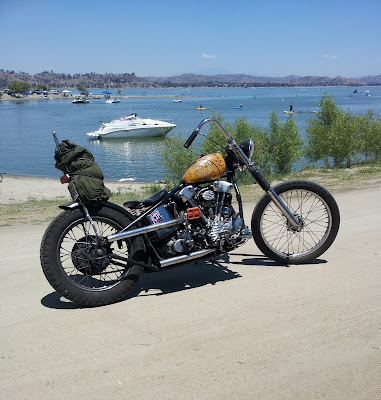